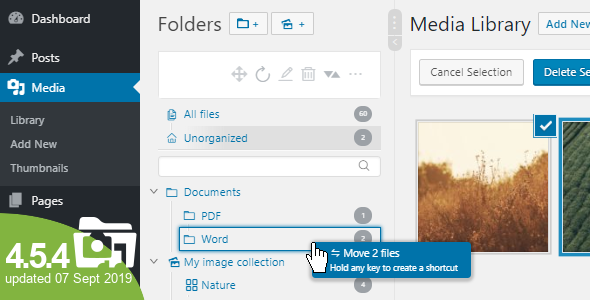 Turn your WordPress media library to the next level with folders / categories. Get organized with thousands of images. Organize media into folders.

RML (Real Media Library) is one of the most wanted media
wordpress plugins. It is easy to use and it allows you to organize
your thousands of images in folders. It is similar to wordpress categories like in the posts.

Use your mouse (or touch) to drag and drop your files.
Create, rename, delete or reorder your folders If you want to select a image from the “Select a image”-dialog (e. g. featured image) you can filter when inserting media. Just install this plugin and it works fine with all your image and media files. It also supports multisite.

The Real Media Library offers a very nice extensibility for other developers. For example you can also install a third-party plugin to create the folders physically on your FTP server (wp-content/uploads) or to synchronize folders with Lightroom. For more have a look at the Known extensions for RML.

If you buy, you get: Forever FREE updates and high quality and fast support.

Why do you need this plugin? Well, having a growing WordPress blog means that you’ll be adding a lot of new media files, like images, audio, and PDF, into your database every day. In a few weeks, your blog will be filled with thousands of media files. How are you going to find one of those files at a later time?

Of course, you can use the WordPress search function and spend a couple of hours finding a file, but who can even remember the names of thousands of files and what happens then?

That’s where the WP Real Media Library plugin comes in. With this plugin, you can easily create gallery folders for your images and normal folders for other media files to properly organize your media library. So that next time whenever you need to find a file, it’s only a mouse-click away.

Organizing your blog media files with WP Real Media Library plugin is as easy as dragging and dropping the files into folders. Then you can rearrange the order of your files by dragging them around to bring the important files to the top of the list for quicker access.

The Tree View of your folders will also make things easier for you to quickly find specific folders in a split-second.

In addition, you can use the WP Real Media Library plugin to insert media galleries to your posts directly from the WordPress ‘New Post’ editor. This will allow you to insert an entire media folder into your WordPress posts as a customizable gallery.

WP Real Media Library is a must-have WordPress plugin that will help save you a ton of time that goes into managing your media files.

As you can see from the screenshots RML (Real Media Library) supports three different folder types:

Question? Write a comment here or have a look at the official RML FAQ

If you buy this item you will become an introduction how to install the plugin.

The real media library is compatible with all wordpress themes and plugins. For example: You bought a theme on themeforest like the X Theme, Avada, Bridge, Salient, Be Theme or Enfold? No Problem! It also works great with WPBakery Page Builder (Visual Composer), Justified Image Grid, Slider Revolution, Elementor, Beaver Builder, WPML, PolyLang, WooCommerce, DIVI Builder and so on….

Justified Image Grid (external premium plugin): With the obvious visual advantage of JIG, a more important feature was created. The ability to show and traverse from any selected point of the RML tree. You can select folders and collections to display, not just galleries. JIG creates virtual pages according to the tree and allows navigation using a breadcrumb.
Learn more

Do you know the wp-content/uploads folder? There, the files are stored in year/month based folders. This can be a very complicated and mass process, especially when you are working with a FTP client like FileZilla.
Learn more

WP/LR Sync is a Lightroom Publish Service for WordPress. It helps you to publish / export your photos and collections to WordPress and to keep them synchronized. Any changes on your photos (including your metadata) or your collections will trigger a re-publish. Your website will be always in sync with your Lightroom.
Learn more

Global Gallery is a responsive gallery plugin for WordPress. Global Gallery handles unlimited image sources and comes with Four gallery layouts, ten lightboxes ready to use and is designed to be displayed on each device. It comes with fully featured slider and carousel.. and much much more!
Learn more

You are a developer and want to extend RML yourself?

RML provides a well documented API, you can find it here. You also can join MatthiasWeb Slack channel to chat with the RML developer.

You can use the following image as icon or banner if you built an add-on:

27 April 2019 - Version 4.4.1
- Added feature to show SVG images in media library as image and not a generic icon
- Fixed count cache in list mode
- Fixed bug with Real Physical Media when queue is not filled in automatic mode when tree node is relocated
- (developers only) Improved API function wp_rml_create_all_children_sql() with MySQL UDF and legacy fallback

13 April 2019 - Version 4.4.0
- Added sort menu for subfolders so you can order subfolders alphabetically
- Added "title" attribute to tree node for accessibility
- Added ability to cancel uploads
- Fixed bug with uploader showing more then one upload message (with spinner)
- Fixed bug with item click on touch devices does not open links / dialogs
- Fixed bug in "Replace image" dialog
- Fixed bug in custom content order when navigating back to All files

24 June 2017 - Version 3.1.2
- Improved the "Add new" in media library to preselect the last queried folder
- Fixed bug with some browsers when local storage is disabled
- (developers only) Improved the wp_rml_dropdown() function to support multiple selected folders

22 April 2017 - Version 3.0.1
- Fixed bug with attachment details, on some browsers the dropdowns were not clickable
- Added a message strip to the plugins page to show MatthiasWeb plugins

22 March 2017 - Version 2.8.4
- Added https://matthias-web.com as author url
- Improved the way of rearrange mode, the folders gets expand after 700ms of hover
- Fixed bugs with absolute pathes and slugs of folders, if you have problems, please rename the first level folders to regenerate
- (developers only) Added getPlain() method to IFolder interface to get a normal array for the folder properties
- (developers only) Prepared readable REST API for folders

Get Free Back link

admintisa
CLOSE
Open
We use cookies to ensure that we give you the best experience on our website. If you continue to use this site we will assume that you are happy with it.Ok